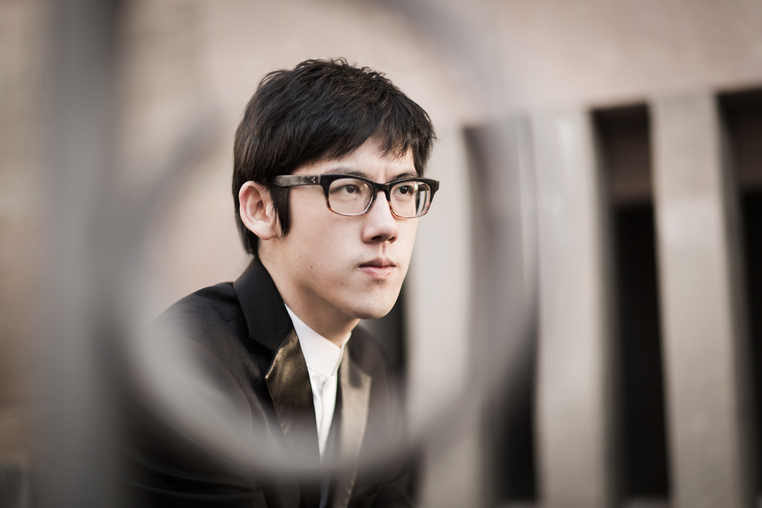 Haochen Zhang was a pianist about whom aficionados were whispering expectant superlatives as he came through the Curtis Institute of Music. The next Yuja Wang, perhaps? Now, the 2012 Curtis graduate has released a studio album on BIS Records of some ambition: Schumann's Kinderszenen, the Liszt Ballade No. 2 in B Minor, Brahms' Three Intermezzi, and Janácek's Piano Sonata 1.X.1905, "From the Street"...

The Kinderszenen are lovely, and he alternates between a gauzy dream state and great heat in the Liszt. Janácek arrives with a finely shaped sense of quiet, questioning wonder. Zhang's love for Brahms was clear at that Curtis recital. So, too, here, where he uncovers ideas well beyond those apparent from just the written note.

MD Theatre Guide: Rachmaninoff's Concerto No. 2 with the National Philharmonic

Zhang is a very young man but plays with the depth and power of a very old musician. He plays with a gentleness and ease, effortlessly flowing throughout the sporadic shifts within Rachmaninoff’s score.  Zhang returned to the stage for a contemplative and sweet encore which truly showed off his excellent prowess.

Once again, I have called upon [Boston Musical Intelligencer] writers to recall favorite concerts and recordings from the parade gone by. The following list serves to remind us of 2016’s musical riches.

The Straits Times: An affinity for Mozart

Zhang Haochen from China, joint winner of the 2009 Van Cliburn International Piano Competition, made his return performance with the Singapore Symphony Orchestra (SSO), this time playing a delightful Piano Concerto No. 20 In D Minor by Mozart [...]

From his entry on the piano, coming after the brooding orchestral introduction, it was clear that Zhang has a natural affinity for and a temperament that is ideal for Mozart.

The 26-year-old plays with a refreshing blend of directness and maturity. His effortless phrasing, fluent articulation and rhythmic precision were beyond reproach and his solo entries were perfectly synchronised with the orchestra.

The second movement was exquisitely played and a highlight of the evening. He gave the movement a sophisticated simplicity, never overdoing the sentimental sections and giving Mozart's unexpected transition into a minor key just the right touch of drama [...]

While the concerto showed off Zhang's consummate musicianship, it was his encore - a cheeky arrangement by Acardi Volodos of Mozart's Rondo Alla Turca - that gave the audience a glimpse of his amazing technical ability.

Beginning with the original notes of Mozart's Rondo, it soon made way for increasingly bold and witty counterpoint, until the well-known melody transformed into a virtuosic showcase.

Imagine a completely conventional-looking piano recital program (Chopin, Schubert, Prokofiev), one where you know every piece well, maybe had even had a fling with one or two of the less-difficult ones—and yet from the opening notes the presentation sounded so probing and nuanced, the voicing so originally textured and sometimes unexpectedly deemphatic, the thoughtfulness so arresting, that you were seemingly hearing the works for the first time.

Haochen Zhang, a Shanghai-born Curtis-educated pianist, appeared Saturday evening at Jordan Hall in the Foundation for Chinese Performing Arts series. Twenty-six years old in a couple of weeks, he has studied with Gary Graffman and Andreas Haefliger. His dramatically sequenced program comprised Chopin Mazurkas, Schubert Impromptus, Chopin Sonata 2, and finally Prokofiev Sonata 7. (Why the Mazurkas aren’t presented more, and as openers, is hard to understand.)

It was the damndest experience. Zhang plays with poise and aplomb, yet always peering, listening to each line’s levels and inflections, calmly adjusting. That might make his work sound forced or labored or overthought, but his artistry actually has none such, flowing naturally almost always. [...]

Zhang, at 24, has all the qualities of a great Rachmaninoff interpreter. He can execute warp-speed passages in a whisper, release great surges of energy, command a stentorian sound when things get heroic and, above all, spin out a golden singing line with aristocratic restraint. Zhang’s demeanor at the instrument is poised, relaxed, almost serene. Then, when you least expect it, as in the first-movement cadenza, it’s as though the mouth of hell has opened up, flames leap from the piano strings and the odor of sulfur fills the air. Zhang’s dazzling playing is without gimmick or ostentation. His imagination is what keeps you on the edge of your seat and breathless to hear what comes next. Pianist, conductor and orchestra achieved a rare hand-in-glove sense of ensemble. The instantaneous, vocal standing ovation was as inevitable as it was deserved.

International Piano - One To Watch

Haochen Zhang: 'One to Watch' according to International Piano Magazine: